Due to the large amount of pirate activity in the area of this prime oceanfront land in Baja Sur in the 16th and 17th century, it is a well known legend that pirate treasure can be found buried in the cave below the promontory. Schools from as far away as La Paz schedule annual visits to explore the cave and Rancho Gaspareno. Punta El Gaspareño, was named after a Spanish Galleon that went aground off of the point in foul weather. The treasure has yet to be discovered! 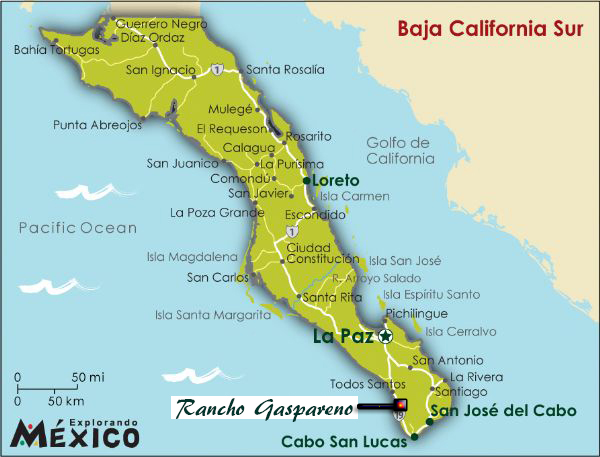 The area is rich with unique folk lore. There is confirmed history of “Amazon” Indian civilization, pirate plunder and treasure, Damiana-the ancient sex enhancer growing wild on the Rancho and more.

1989: Ernesto Ruffo Appel of the PAN becomes the first non-PRI governor of Baja California and the first opposition governor of any state since the Revolution.

The Guaycuras Indians were native to the Southern Baja area and as legend has it, the men were used for procreation and the tribe was run by their ‘Amazon Queens’, the most famous one being Queen Calafia. Some schools of thought have it that California was named after her. She was quite famous as evidenced by the use of her name “Calafia” throughout Baja and Mainland Mexico.

The Guaycuras Indians were tall, over 6′ tall and looked like no other Indian in any part of Baja or mainland Mexico. There is no record of any Indian anywhere in the western hemisphere that has any likeliness to them. Due to their resemblances to the seafaring voyagers of the Pacific Islanders, and the similar latitude to the Hawaiian Islands, there is more than a possibility that they were direct descendants of Polynesian seafarers attempting to find the Hawaiian Islands that had blown off course and landed at southern Baja California and settling there. You will notice as you observe the local people of the area, you will see a number of tall slender dark haired Indians; these are descendants of the original Guaycuras.

By 1767, virtually all the Guaycuras Indians in the area had died either of European diseases or in skirmishes with the Spanish. Surviving mission Indians were moved to missions farther north, but San Jose del Cabo just 30 minutes south, remained an important Spanish military outpost until the mid-19th century when the presidio was turned over to Mexican nationals.

English Pirates on the Sea of Cortez

Sir Francis Drake, Thomas Cavendish, William Dampier, Woodes Rogers, Thomas Dover, Cromwell and other English privateers left behind a colorful Baja legacy. In spite of Spain’s repeated attempts to colonize the peninsula, throughout the Spanish colonial period the pirates probably gained more wealth in the Californias than the Spanish themselves. For 250 years they plagued the Manila galleons off the coast of the Californias, finding the bays and lagoons of Baja’s Cape Region perfect hiding places from which to launch attacks on treasure-laden ships.

In La Paz, their knowledge of the strong breeze that blows into the harbor every summer afternoon, assisted the pirates in attacking Spanish galleons while the vessels were effectively trapped in the bay. Four centuries after the first Manila-Acapulco voyages, this afternoon wind is still known as El Coromuel, named for the Puritan Cromwell’s, father and son, who ruled successively as Lord Protectors of England or Cromwell the Pirate.

The Disappearance of the Ship, Desire

The most notorious of the Pacific privateers was Sir Thomas Cavendish, whose greatest feat of plunder occurred at Cabo San Lucas in 1587. There his two English vessels, Desire and Content, commandeered the Spanish galleon Santa Ana following a protracted sea battle. Cavendish set fire to the Santa Ana after looting its cargo holds and setting its crew and passengers ashore. The Spanish crew later retrieved the burned hulk and restored it for a return to Acapulco.

The plundered treasure, meanwhile, was divided between the Desire and Content. The ships set sail for England immediately, but during the first night of their triumphant voyage the Desire disappeared. Cavendish reported in England that the captain and crew of the Desire must have scuttled the ship on a nearby island and disappeared with the loot. Neither the wreckage of the vessel nor the treasure was ever discovered; some historians speculate that at least part of the missing wealth remains buried near the Cape.

A Visit by Robinson Crusoe

In 1709, famed corsair, Woodes Rogers, landed in La Paz after rescuing a seaman who’d been marooned five years on a deserted island off Chile’s coast. The rescued man was Alexander Selkirk, whose island sojourn became the inspiration for Daniel Defoe’s, Robinson Crusoe, published in 1719. Selkirk was aboard Roger’s Dover when the crew captured the Spanish galleon Encarmacion off Cabo San Lucas in 1709; he served as sailing master on the ship’s return voyage to England the following year.

It is well documented history that notorious pirates roamed, sailed and plundered in the cape area of this prime oceanfront land in Baja Sur for almost 300 years. During these periods pirates were mainly of Dutch, Spanish, English, Chilean origin. In the periods from the mid 1500’s to the 1800’s over 250 Spanish Galleons loaded with their super cargos of various valuables from the Philippines (named Manila Galleons), passed through and stopped in the cape areas to prepare for their trips to Acapulco, the headquarters for new Spain and then on to Spain. Many tales of fighting and plundering are well documented in history. As recent as 1974 while building the road to Pichelinque, the out-of-town road to the ferry terminal near la Paz, a pirate chest of plundered loot was discovered by road workers. 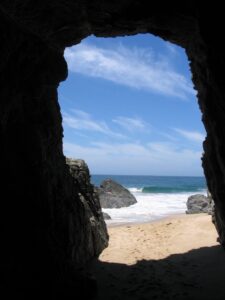 Many local school trips bring classes to the cave of this prime oceanfront land in Baja Sur pictured to the right and tell the well known stories of long ago.

Located inside the rock promontory on the southwest corner of the Rancho Gaspareno property is a cave that can be accessed from the beach at low tides. It has at times a very high ceiling.

Legend has it there is pirate’s treasure buried somewhere in the cave, and with the history and confirmation of pirates in the area, this just could be true. The cave goes back approximately 100 feet into the rock, with sand coming in and out with the different tides, the height of the cave can vary drastically depending on the time of the year.